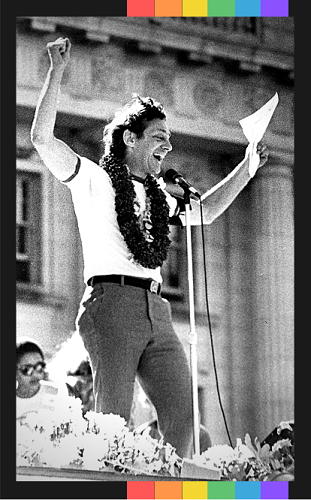 Harvey Milk was born May 22, 1930 to Jewish Lithuanian immigrants.  Though he was considered the most pro-LGBTQ politician in the United States at the time, politics and activism were not his early interests; he was neither open about his sexuality nor civically active until he was 40.

After several unsuccessful bids for a seat on the San Francisco’s Board of Supervisors in 1973 and 1976, he was finally elected in 1977, becoming one of the first openly gay elected officials in U.S. history.  He was inaugurated as a City-County Supervisor on January 9, 1978 -- an important and symbolic victory for the LGBTQ community. His election made national and international headlines.

Harvey Milk believed that government should represent individuals and should insure equality for all citizens while providing needed services. He spoke for the participation of LGBTQ people and other minorities in the political process. The more gay people came out of the closet, he believed, the more their families and friends would support protections for their equal rights.

Only ten months after he took office, he and San Francisco Mayor George Moscone were assassinated on November 27, 1978.  In a tape recorded before his death, Milk was quoted saying, "If a bullet should enter my brain, let that bullet destroy every closet door in the country."  Countless LGBTQ people across the nation came out on the day Milk was killed.

In 2009, a bill designating Milk’s birthday, May 22, as an annual “Harvey Milk Day” was introduced by Senator Mark Leno and championed by Harvey’s nephew, Stuart Milk, and Equality California.  Stuart Milk said, in a statement made in 2012, "Harvey Milk Day is a reminder to put hate and separation in their place, a place of learning, of wrongs that have been righted, and reminders not to repeat them, a day to create the dream and vision of what is possible, even in the all too many places around the world where it is still so hard to visualize that dream."

This November will mark the 43rd anniversary of Harvey Milk's assassination.  Though his political career was cut short less than a year after it started, Milk has left a powerful legacy.

Hover over the images below for more information:

As a politician, Milk spoke out on state and national issues of interest to LGBTQ people, women, racial and ethnic groups, and other marginalized communities.  He served as a bright source of inspiration to the men and women who lived in a time when living authentically and loving who you want wasn’t always an option and came at a great price.

The Harvey Milk Foundation was established by Milk's nephew, Stuart Milk, and Anne Kronenberg, his campaign manager and aide.  It is dedicated to realizing his vision of equality and authenticity for everyone, everywhere.

The life and career of Harvey Milk has been the subject of an opera, books, and films. Check out our catalog for some great pieces of media related to this iconic figure, or click on the book covers below:

Don't forget our eSources!  We have several encyclopedia resources that host further information about Harvey Milk and his legacy in the LGBTQ community.  Visit the Florida Electronic Library or Gale in Context: Biography for biographical information and articles about Harvey Milk.  For different age groups, ranging from kids to students to adults, check out World Book Online.