Participate in Summer at the Library! This year's theme is Oceans of Possibilities, so why not read a great non-fiction title about the ocean? Below you will find a few titles we highly recommend. 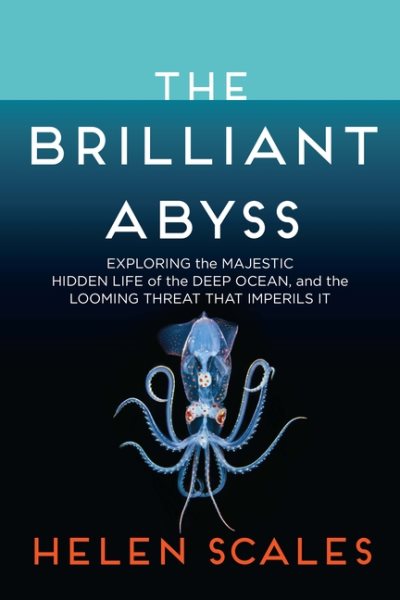 The Brilliant Abyss
by
Helen Scales

“The oceans have always shaped human lives,” writes marine biologist Helen Scales in her vibrant new book The Brilliant Abyss, but the surface and the very edges have so far mattered the most. “However, one way or another, the future ocean is the deep ocean.”

A golden era of deep-sea discovery is underway. Revolutionary studies in the deep are rewriting the very notion of life on Earth and the rules of what is possible. In the process, the abyss is being revealed as perhaps the most amazing part of our planet, with a topography even more varied and extreme than its Earthbound counterpart. Teeming with unsuspected life, an extraordinary interconnected ecosystem deep below the waves has a huge effect on our daily lives, influencing climate and weather systems, with the potential for much more—good or bad depending on how it is exploited. Currently the fantastic creatures that live in the deep—many of them incandescent in a world without light—and its formations capture and trap vast quantities of carbon that would otherwise poison our atmosphere; and novel bacteria as yet undiscovered hold the promise of potent new medicines. Yet the deep also holds huge mineral riches lusted after by many nations and corporations; mining them could ultimately devastate the planet, compounded by the deepening impacts of ubiquitous pollutants and rampant overfishing.

Eloquently and passionately, Helen Scales brings to life the majesty and mystery of an alien realm that nonetheless sustains us, while urgently making clear the price we could pay if it is further disrupted. The Brilliant Abyss is at once a revelation and a clarion call to preserve this vast unseen world. 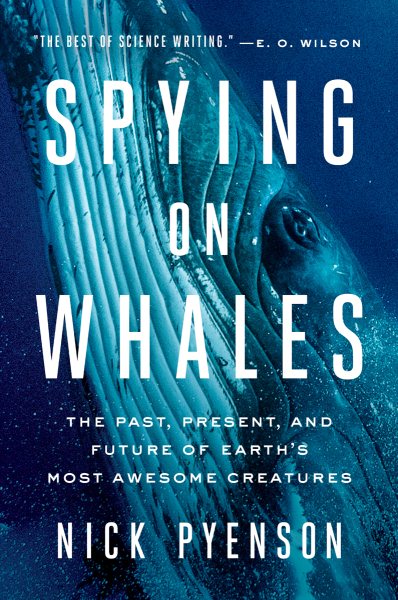 Spying on Whales
by
Nick Pyenson

Whales are among the largest, most intelligent, deepest diving species to have ever lived on our planet. They evolved from land-roaming, dog-sized creatures into animals that move like fish, breathe like us, can grow to 300,000 pounds, live 200 years and travel entire ocean basins. Whales fill us with terror, awe, and affection--yet there is still so much we don't know about them. Why did it take whales over 50 million years to evolve to such big sizes, and how do they eat enough to stay that big? How did their ancestors return from land to the sea--and what can their lives tell us about evolution as a whole? Importantly, in the sweepstakes of human-driven habitat and climate change, will whales survive?

Nick Pyenson's research has given us the answers to some of our biggest questions about whales. He takes us deep inside the Smithsonian's unparalleled fossil collections, to frigid Antarctic waters, and to the arid desert in Chile, where scientists race against time to document the largest fossil whale site ever found. Full of rich storytelling and scientific discovery, Spying on Whales spans the ancient past to an uncertain future--all to better understand the most enigmatic creatures on Earth. 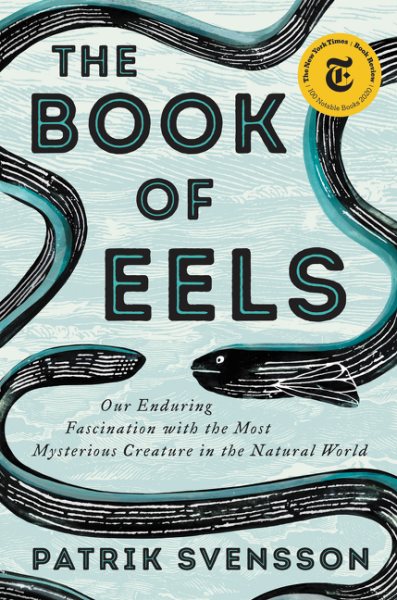 The Book of Eels
by
Patrik Svensson

Remarkably little is known about the European eel, Anguilla anguilla. So little, in fact, that scientists and philosophers have, for centuries, been obsessed with what has become known as the “eel question”: Where do eels come from? What are they? Are they fish or some other kind of creature altogether? Even today, in an age of advanced science, no one has ever seen eels mating or giving birth, and we still don’t understand what drives them, after living for decades in freshwater, to swim great distances back to the ocean at the end of their lives. They remain a mystery.

Drawing on a breadth of research about eels in literature, history, and modern marine biology, as well as his own experience fishing for eels with his father, Patrik Svensson crafts a mesmerizing portrait of an unusual, utterly misunderstood, and completely captivating animal. In The Book of Eels, we meet renowned historical thinkers, from Aristotle to Sigmund Freud to Rachel Carson, for whom the eel was a singular obsession. And we meet the scientists who spearheaded the search for the eel’s point of origin, including Danish marine biologist Johannes Schmidt, who led research efforts in the early twentieth century, catching thousands upon thousands of eels, in the hopes of proving their birthing grounds in the Sargasso Sea.

Blending memoir and nature writing at its best, Svensson’s journey to understand the eel becomes an exploration of the human condition that delves into overarching issues about our roots and destiny, both as humans and as animals, and, ultimately, how to handle the biggest question of all: death. The result is a gripping and slippery narrative that will surprise and enchant. 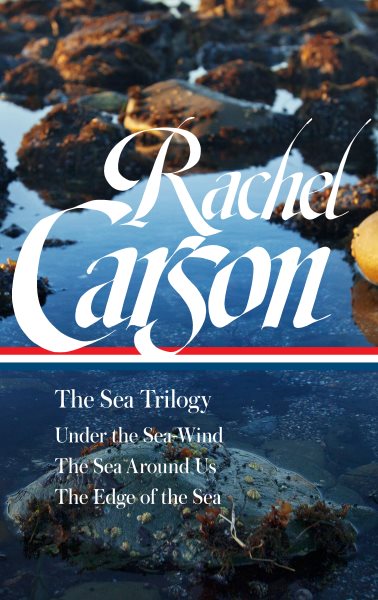 The Sea Around Us
by
Rachel Carson

Originally published in 1951, The Sea Around Us is one of the most influential books ever written about the natural world. Rachel Carson's ability to combine scientific insight with poetic prose catapulted her book to the top of The New York Times best-seller list, where it remained for more than a year and a half. Ultimately it sold well over a million copies, was translated into 28 languages, inspired an Academy Award-winning documentary, and won both the National Book Award and the John Burroughs Medal.

The Sea Around Us remains as fresh today as when it first appeared over six decades ago. Carson's genius for evoking the power and primacy of the world's bodies of water, combining the cosmic and the intimate, remains almost unmatched: the newly formed Earth cooling beneath an endlessly overcast sky; the centuries of nonstop rain that created the oceans; giant squids battling sperm whales hundreds of fathoms below the surface; the power of the tides moving 100 billion tons of water daily in one bay alone; the seismic waves known as tsunamis that periodically remind us of the oceans' overwhelmingly destructive power. The seas sustain human life and imperil it. Today, with the oceans endangered by the dumping of medical waste and ecological disasters such as the Exxon oil spill in Alaska, the gradual death of the Great Barrier Reef, and the melting of the polar ice caps, Carson's book provides a timely reminder of both the fragility and the centrality of the ocean and the life that abounds within it. Anyone who loves the sea, or who is concerned about our natural environment, will want to read, or re-read, this classic work. 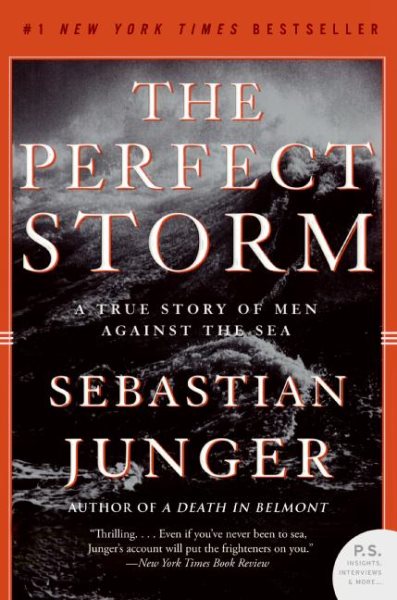 The Perfect Storm
by
Sebastian Junger

The worst storm in history seen from the wheelhouse of a doomed fishing trawler; a mesmerisingly vivid account of a natural hell from a perspective that offers no escape.

The ‘perfect storm’ is a once-in-a-hundred-years combination: a high pressure system from the Great Lakes, running into storm winds over an Atlantic island – Sable Island – and colliding with a weather system from the Caribbean: Hurricane Grace.

This is the story of that storm, told through the accounts of individual fishing boats caught up in the maelstrom, their families waiting anxiously for news of their return, the rescue services scrambled to save them. It is the story of the old battle between the fisherman and the sea, between man and Nature, that awesome and capricious power which can transform the surface of the Atlantic into an impossible tumult of water walls and gaping voids, with the capacity to break an oil tanker in two.

In spare, lyrical prose THE PERFECT STORM describes what happened when the Andrea Gail looked into the wrathful face of the perfect storm. 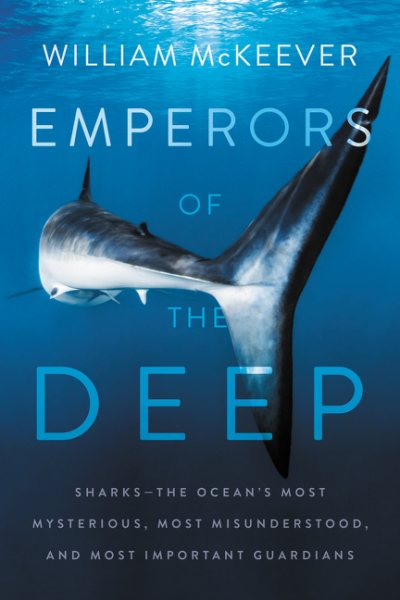 Emperors of the Deep
by
William McKeever

The first book to reveal the hidden world of sharks, Emperors of the Deep draws upon the latest scientific research to examine four species in detail – mako, tiger, hammerhead and great white – as never before. An eye-opening tour of shark habitats ranges from the coral reefs of the Central Pacific where great whites mysteriously congregate every autumn in what researchers call a festival for sharks, to tropical mangrove forests where baby lemon sharks play in social groups and to the frigid waters of the North Atlantic, home to 400-year-old Greenland sharks, the world’s longest-lived vertebrates. McKeever also traces the evolution of the myth of the ‘man-eater’ and exposes the devastating effects of the fishing industry on shark populations: In 2018 only four people died in shark attacks while we killed 100 million sharks.

At once a journey through the misunderstood world of sharks and an urgent call to protect them, Emperors of the Deep celebrates these iconic predators that continue to capture our imagination – and that desperately need our help to survive. 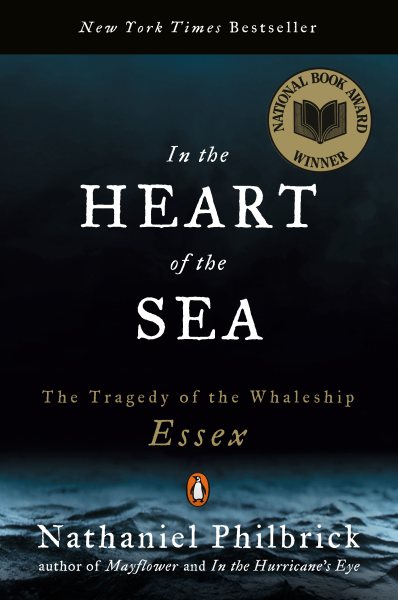 In The Heart of the Sea
by
Nathaniel Philbrick

Winner of the National Book Award, Nathaniel Philbrick's book is a fantastic saga of survival and adventure, steeped in the lore of whaling, with deep resonance in American literature and history.

In 1820, the whaleship Essex was rammed and sunk by an angry sperm whale, leaving the desperate crew to drift for more than ninety days in three tiny boats. Nathaniel Philbrick uses little-known documents and vivid details about the Nantucket whaling tradition to reveal the chilling facts of this infamous maritime disaster. In the Heart of the Sea, recently adapted into a major feature film starring Chris Hemsworth, is a book for the ages.

Descriptions adapted from the publisher.
By Sabrina on June 27, 2022