After more than forty years with the Alachua County Library District, Bertha Wicks has retired.

Bertha started with the Santa Fe Regional Library, now known as the Alachua County Library District, under a program that Santa Fe College created called the Vocational Rehab Program. The program was designed to allowed people to get on-the-job training so they could have skills to make them more employable. 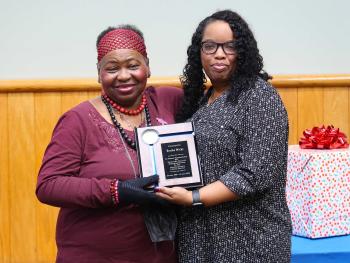 Bertha came to work at the library in 1980 and made the best of her opportunity. She worked hard to learn as much as she could about the library. She did many of the tasks of a library page. During that time, the library pages worked in all the departments of the library including Circulation, Adult Services (called Reference), Youth Services (Children's Department), Technical Services, and even Bookmobile Services (called Extension Services at the time). Bertha later decided that she wanted to apply to be a library assistant. She tried so many times and didn’t get the position, but she never gave up. She showed what perseverance could do and she finally got the job. When Bertha was told she got the job of library assistant, she couldn’t believe it.

Bertha worked hard to ensure that the patrons received the type of service that they deserved.  She did this by working the desks and greeting each person that came in with her quiet unassuming manner. She believes in treating everyone the same no matter who they are. People would go to her when she was on the desk because they knew that she would answer their question. If she didn’t know the answer then she would find someone who could answer the question. She never wanted to give anyone the wrong answer.

Bertha was the library’s photographer long before there was a department that took care of photography. She enjoyed taking pictures at all the library events that she could attend. She believed that everything had a place and that it needed to be in its place 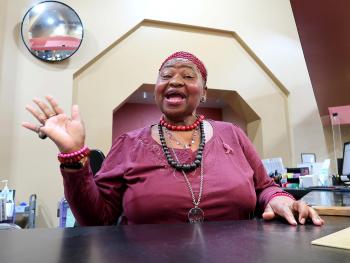 Bertha had a few quirks, but that made her Bertha. She didn’t take the elevators. She would put books on a cart and then put the cart on the elevator, then she would walk upstairs to get the book cart off the elevator on the appropriate floor. She would willingly help others with whatever needed to be done. Bertha did it all, from shelving books, checking items in and out, searching for and providing reserves, and helping patrons.

She will be remembered by staff and patrons as the quiet lady at the circulation desk with the charmingly matching clothes. Working at the library was important to Bertha. In her forty two years at the Library District, Bertha had to call out sick less than ten times in over forty years.  Now that is a record.

Bertha has been a great role model for staff and her success at the Library District proves what happens when we partner with others to give someone a chance. She is retiring from a place where she learned a lot and made her mark on the library!