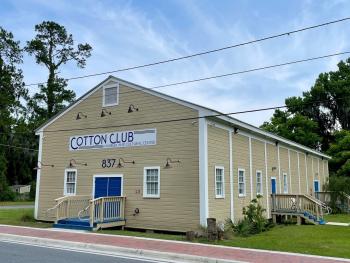 The Cotton Club Museum and Cultural Center (CCMCC), found in the Springhill neighborhood of Gainesville, aims to preserve African American history and serve as a living cultural institution, promoting visual and performing arts. The wood-frame building at 837 Southeast 7th Avenue has a rich history that shines a light on the African American experience during the segregation era.

In the early 1940s, the building that would one day become the Cotton Club, was built as a PX, or Postal Exchange, at Camp Blanding in Starke, FL for service members in World War II. After the war, it was bought by Gainesville grocers, William and Eunice Perryman, who ran a store in the Springhill neighborhood. They transported the building to the lot behind their grocery and opened it as the Perry Theater. This theater served the African American community and, this being the time of segregation, showed films after they had run at the theaters serving white customers. They were, however, one of the only theaters in the area in which you could see films with all-Black casts. Visitors to the museum will notice the cutouts in the north wall, from which films would be projected. The building still has an intact projection room, which the CCMCC would eventually like to open to visitors. The room is made entirely of cement, which would protect the wooden building if the highly flammable film reels caught fire. 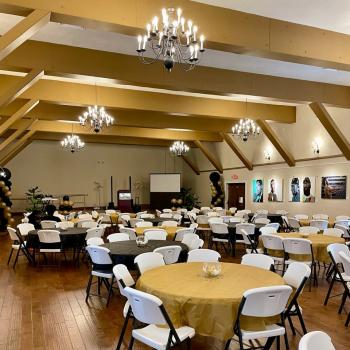 In 1949, the Perrymans closed the theater and sold the building to Charles and Sarah McKnight, who opened the building as the Cotton Club, named after the famous Harlem nightspot. In the years that the Cotton Club was open, they hosted many African American performers, including Bo Diddley, B.B. King, Brook Benton, Rufus Thomas, James Brown, and Ray Charles. The Cotton Club was an important venue in the “Chitlin’ Circuit,” a loose network of venues in the Southeast US that catered to Black audiences. Gainesville's Dunbar Hotel served African Americans, which made Gainesville a desirable stop for Black performers in Florida. They could stay at the hotel and perform at the Cotton Club and other venues in surrounding towns, such as Lawtey and Ocala, before moving on to another region.

The Cotton Club closed in 1952 when its liquor license was not renewed. It reopened in 1953 as the Blue Note Ballroom, a “juke joint” with less of a focus on live entertainment. They had a jukebox, which was no small thing in an era when there was no radio station in North Central Florida that played music made by Black musicians. The Blue Note closed in 1959, and the building was used until 1970 as a warehouse for Badcock Furniture.

The building was left unoccupied and was eventually bought by Mt. Olive African Methodist Episcopal church in 1995. In 1997, the Cotton Club Museum and Cultural Center Board was established. The building was restored, and the museum officially opened on February 4, 2019. It now serves as an event space that can seat up to 200 people and a museum that displays art by Dr. Patricia Hilliard-Nunn and rotating exhibitions, such as Unapologetically Black by Yvonne Ferguson and an upcoming feature of Gullah Geechee art.

The Cotton Club Museum and Cultural Center is open Wednesdays, Thursdays, and Saturdays from 11 a.m. to 4 p.m.