Turtles All The Way Down - a review by Owen 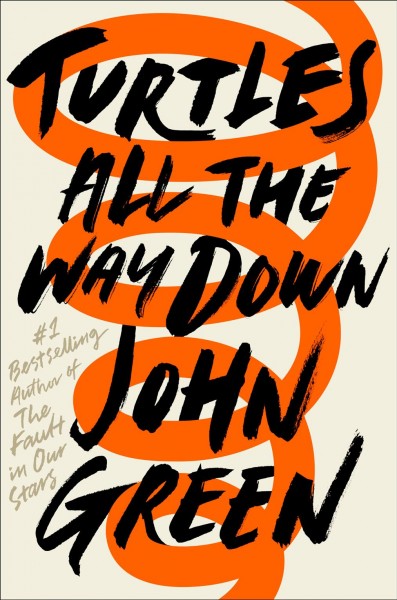 Turtles All the Way Down by John Green

Aza, the main character of the novel, struggles to cope with her debilitating mental illness while navigating the everyday stresses of being a teenager. Everything in Aza’s life, from her blossoming relationship with her childhood crush to her seemingly fragile friendships, is impacted by her anxiety. When an old friend’s father goes missing, Aza’s already precariously balanced life begins changing at a rapid pace. After attempting to investigate the mystery, she is reunited with the missing man’s son, Davis, with whom she forms an intimate, yet cautious relationship.

Caught between her best friend Daisy’s wish to pursue the missing man and Davis’s desire to keep his father out of the picture, Aza’s anxiety reaches new peaks, with which she is unable to cope at times. Meetings with her psychiatrist seem unhelpful and pointless, and Aza quickly comes to the conclusion that she is controlled by, and alone with, her own traitorous mind. Turtles All the Way Down follows Aza as she struggles to accept herself as more than her own thoughts, feels the sorrow of departing memories, and, ultimately, reaches an understanding: life goes on.

John Green’s window into the teenage mind is stunningly clear; his success as an author of young adult fiction points to this as much as his prose. Turtles All the Way Down can feel dramatic at times. Seemingly every other sentence is some grand posturing on the universe, or the human psyche. In a way, however, this improves the novel’s eerily accurate portrayal of a developing teenager. Teenagers are often dramatic people; as they begin to discover all of the mind-breaking rabbit-holes of thought explored centuries ago by Plato and Socrates, they begin to understand the vastness of the world around them. This awe that comes with the death of childhood innocence (there I go, see? Dramatic.) is, for a brief period, completely overwhelming. I can’t personally speak to the accuracy of Aza’s portrayal, but her plight came off as real enough. She grew as a character while remaining realistic. Her illness did not magically disappear, nor did she become a “better person” throughout her experiences. She learned, rather, how to live her life as Aza, not as a character. This message is incredibly important for young teens in an age of self-deprecation and constant comparison. As a YA novel, Turtles All the Way Down gets 5 stars.

Is Aza’s mental illness a defining characteristic of hers? If so, should it be? If not, how is she able to overcome it?

At the end of the story, Aza and Davis go their separate ways. Do you think this is a realistic ending? How is Davis still important to Aza even after their relationship ends?

Is Daisy a good friend to Aza? If so, list some ways in which she helps Aza. If not, describe ways she could be more supportive.