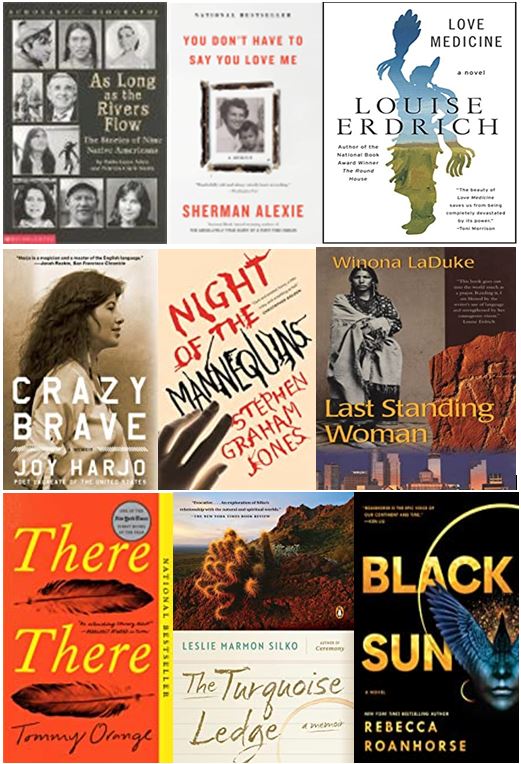 Sherman Alexie: A Spokane/Coeur d'Alene poet and novelist, was born on October 7, 1966, on the Spokane Indian Reservation in Wellpinit, Washington.

Paula Gunn Allen:  Daughter of a Lebanese-American father and a Laguna-Sioux-Scottish mother, Allen was raised in New Mexico on the Laguna Pueblo where she was deeply influenced by matriarchal Pueblo culture.

Louise Erdrich: As the daughter of a Chippewa Indian mother and a German-American father, Erdrich explores Native-American themes in her works, with major characters representing both sides of her heritage.

Joy Harjo: Harjo was born in Tulsa, Oklahoma, and is a member of the Muscogee (Creek) Nation. She was named U.S. poet laureate in June 2019.

N. Scott Momaday: Momaday is a Kiowa novelist, short story writer, essayist, and poet. His novel House Made of Dawn was awarded the Pulitzer Prize for Fiction in 1969, and is considered the first major work of the Native American Renaissance.

Tommy Orange: Born and raised in Oakland, California, Orange is a citizen of the Cheyenne and Arapaho Nations of Oklahoma. His first book There There was a finalist for the 2019 Pulitzer Prize.

Rebecca Roanhorse: Roanhorse is an American science fiction and fantasy writer from New Mexico. She has written short stories and science fiction novels featuring Navajo characters. Her work received Hugo and Nebula awards, among others.

Leslie Silko: Silko is a writer of the Laguna Pueblo tribe, and one of the key figures in the First Wave of what literary critic Kenneth Lincoln has called the Native American Renaissance.

To learn more about Native American Life and Literature, please feel free to use the ACLD catalog and browse the collection.

Joy Harjo A Poem to Get Rid of Fear