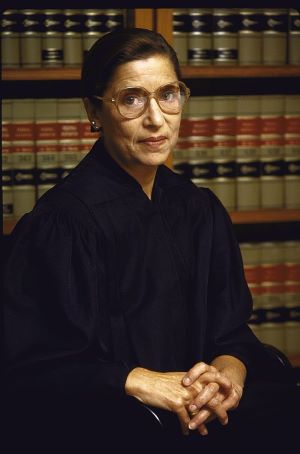 Ruth Bader Ginsburg grew up in Brooklyn, New York during the 1930's and 40's. After graduating at the top of her class in high school, she received a full scholarship from Cornell University.  In 1956, she enrolled in Harvard Law School where she was one of 9 women in a class of 500. However, when her husband, Martin Ginsburg, accepted a position at a New York Law firm, they moved back to the city, and she completed her law degree at Columbia University.

Ginsburg graduated from law school in 1959, but it was almost impossible for her to find a clerkship and even more difficult to find a job practicing law in New York City during this era. She often said, "she had three strikes against her, she was Jewish, a woman, and perhaps the ultimate deal-breaker, a mother."

Ginsburg would go on to teach at Rutgers University Law School and then at Columbia University where she became its first female tenured professor. She was also the founding director of the Women's Rights Project of the ACLU, and in 1980, then-president Jimmy Carter appointed her to the United States Court of Appeals for the District of Columbia. However, it was her work with the Women's Rights Project of the ACLU during the 1970's that would have the greatest impact on society and cement her nomination as a Supreme Court Justice. As counsel for the ACLU from 1973-1980, Ginsberg argued six landmark cases on gender equality before the U.S. Supreme Court. She won five of those cases. These cases were ”strategically advanced and established precedents for treating men and women equally under the law in areas of jury duty requirements, social security, military spousal benefits, and the legal drinking age."

In 1993, then-president Bill Clinton stated, in nominating her to the Supreme Court, that she was "to the Women's Movement what former Supreme Court Justice Thurgood Marshall was to the movement for the rights of African Americans," and that he was "proud to nominate this path-breaking attorney, advocate, and judge."

In 1993, Ruth Bader Ginsburg, along with Sandra Day O'Connor, became the second woman to serve on the Supreme Court.  Ginsberg would go on to serve 27 years. The longest of any female Supreme Court Justice.

In a statement, after her death, on Friday, Sept. 18, former president Bill Clinton said, "Her 27 years on the Court exceeded even my highest expectations when I appointed her," and "her landmark opinions advancing gender equality, marriage equality, the rights of people with disabilities, the rights of immigrants, and so many more moved us closer to a more perfect union."

In 2011, at an event at the University of California Hastings College, Ginsburg said, "I would just like people to think of me as a judge who did the best she could with whatever limited talents I had to keep our country true to what makes it a great nation and to make things a little better than they might have been if I hadn't been there.”

Ruth Bader Ginsburg's “talents” served her and this country well, and not only made things “a little better” for a lot of us, her talents propelled her into iconic status for this generation.

Often referred to as the Notorious R.B.G by young women of this generation who admire her and credit her as a trailblazer for women’s rights, Ginsburg and the legacy she leaves will continue to “keep our country true to what makes it a great nation.”