This Summer with the Library, Tower Road staff has been learning all about animals and their diets! After all, everybody eats!

Keep reading to learn about some of the most interesting eaters in the animal kingdom! 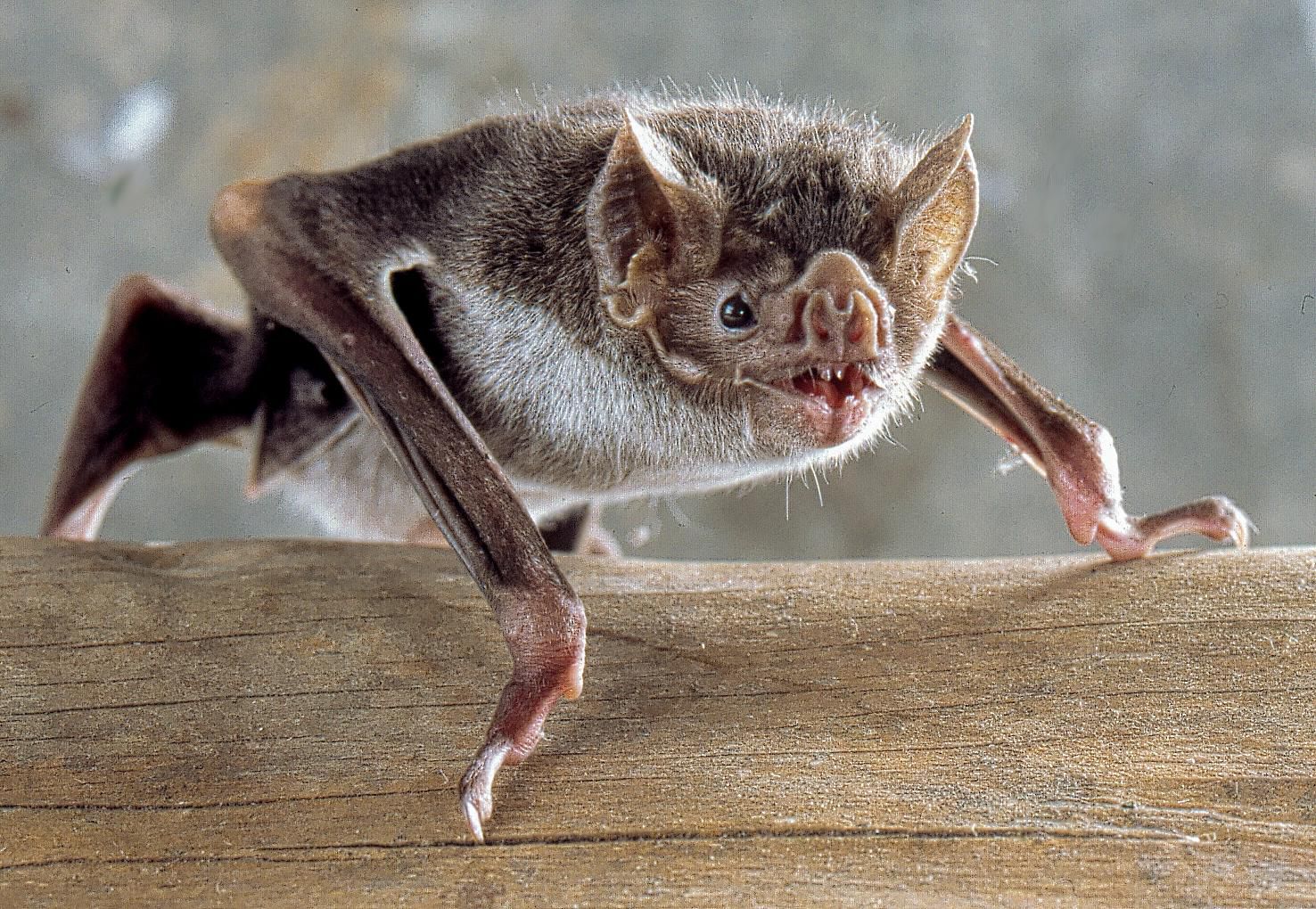 The first animal on our list is the Vampire Bat (Desmodus rotundus). Vampire Bats live in Mexico, Central America, and South America and subsist by feeding on the blood of warm-blooded animals like chickens, cow, and other livestock. Unlike their movie-monster namesakes Vampire Bats don't actually suck blood.These bats make a small cut with their razor-sharp triangular teeth and then lick up the blood with their tongues. Vampire Bats are also unique in that they can walk, run, and jump using all four of their limbs. This adaptation helps them attach to their prey and get out of the way quickly if the prey is on the move. 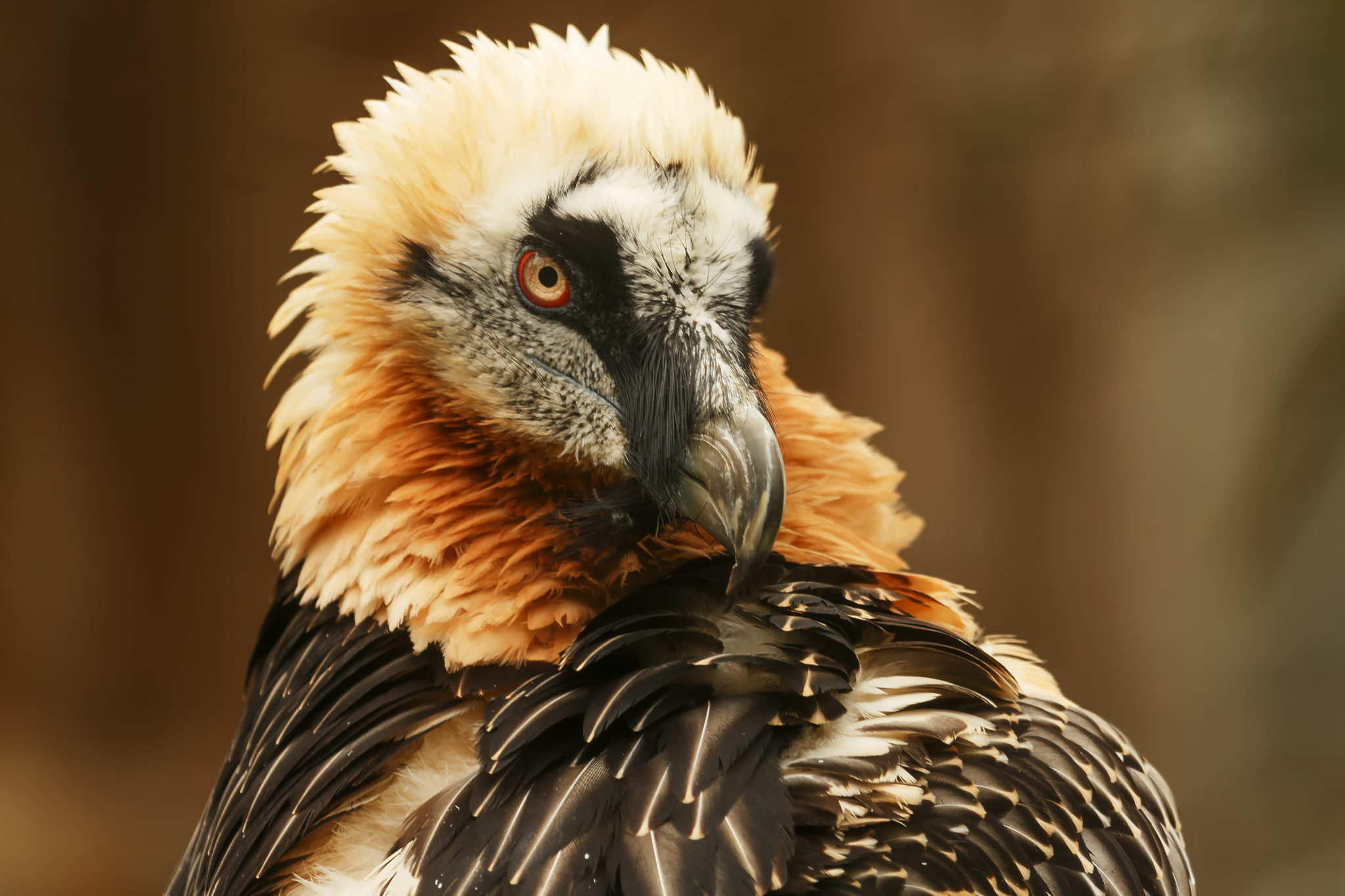 The Bearded Vulture or Lammergeier (Gypaetus barbatus) lives in the mountainous regions of Africa, Southern Europe and Asia and is the only animal that feeds almost exclusively on bone (70-90%). The large bird (they can weigh nearly 16 lbs and have a wingspan of more than 8 feet) picks up bones and throws them onto rocks to break them into smaller pieces that are easier to eat. They can even swallow smaller bones whole! Bearded Vultures are able to digest bones easily to extract nutrients and generally there's no competition for their food source. 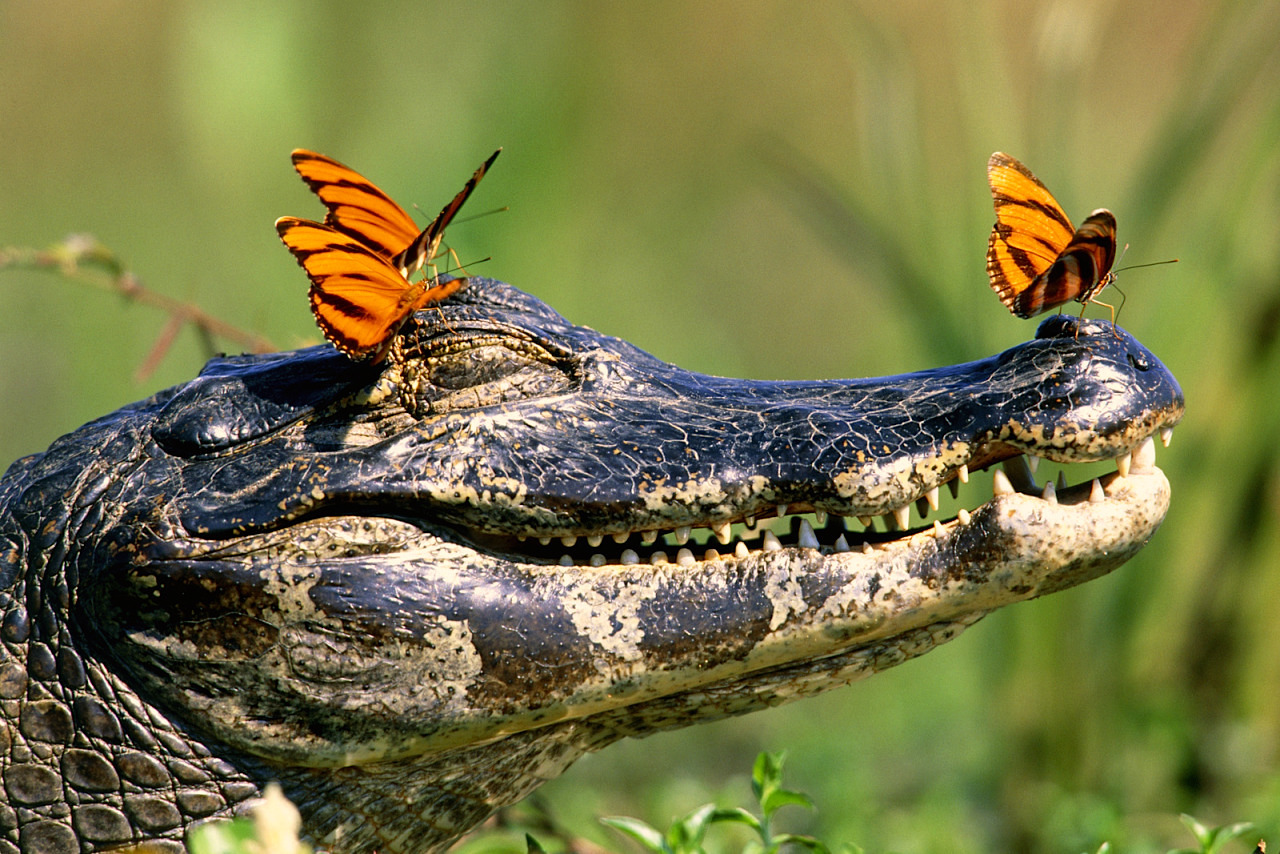 Lachryphagous Moths & Butterflies! Lachryphagous means tear-drinking. That's right, there are a number of species of moths and butterflies that commonly drink the tears of other animals as a normal part of their diet. Sodium (salt) is an important nutrient in the diet of most animals but it can be hard to find in the usual flower nectar that moths and butterflies usually feed on. As such, some species of moths and butterflies have adapted by perching on the heads of larger animals like birds, caimans, and turtles to slurp up their salty tears. It might seem a little strange but this process doesn't hurt the larger animal so it's a real win-win! The Amazonia Flambeau or Julia butterfly (Dryas iulia) is one species known to drink tears. 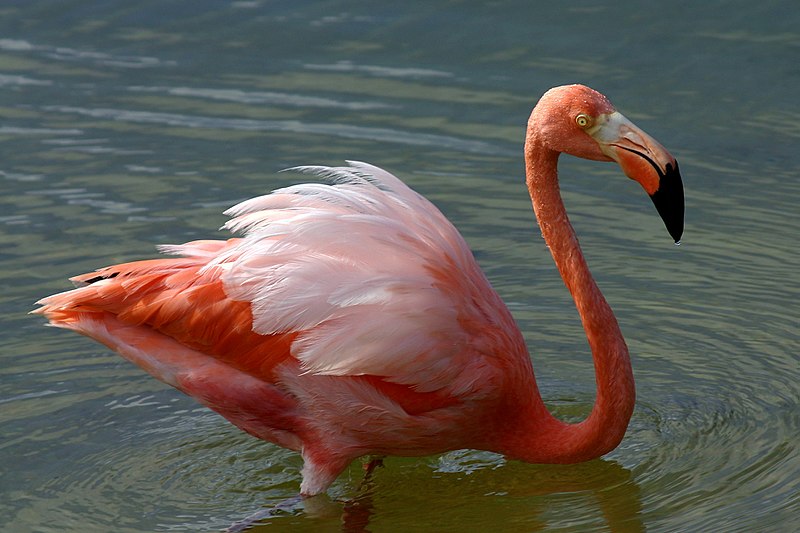 There are several species of Flamingos that live in various places around the world though all are found in South America. The most widespread species is the Greater Flamingo (Phoenicopterus roseus). Flamingos are long-legged wading birds that are usually covered in bright pink feathers. However, did you know that Flamingos are actually born with gray/white feathers and only get their colors as they get older? The bright pink color of Flamingos comes from beta carotene, a red-orange pigment that’s found in high numbers within the algae, larvae, and brine shrimp that Flamingos eat in their wetland environment. 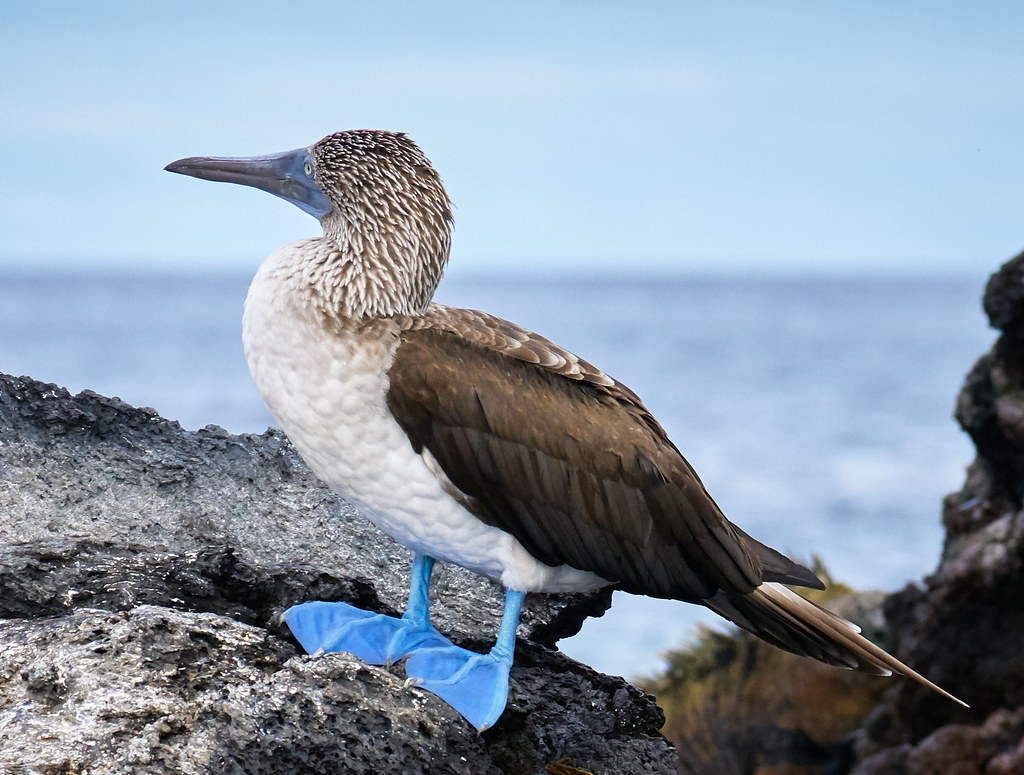 Similarly, Blue Footed Boobies (Sula nebouxii) are bird that live off the western coasts of Central and South America. These carnivorous birds feed mostly on fish which are high in carotenoid pigments. In Blue Footed Boobies, this dietary pigment concentrates in the bird's feet and turns them blue! Studies have shown that the bluer a Boobies feet, the healthier the animal tends to be and it appears that the birds know this too. During mating season, female birds are drawn to the male bird with the bluest feet in order to create a healthy egg and eventually, a healthy chick! 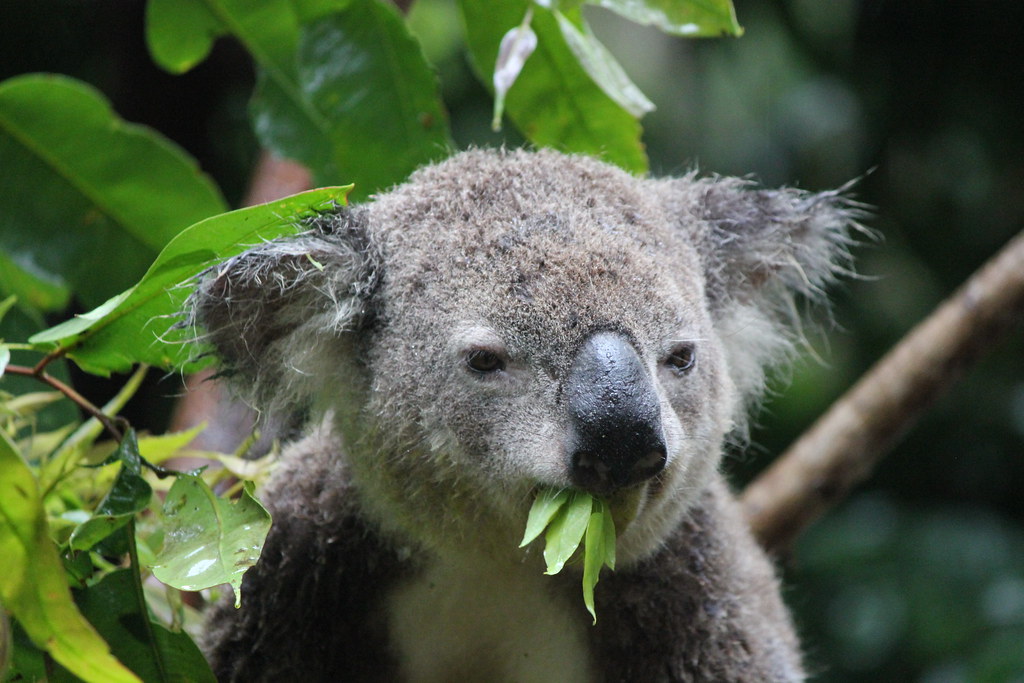 Koalas (Phascolarctos cinereus) are a marsupial native to the island continent of Australia. You may have heard that Koalas only eat Eucalyptus leaves, but did you know that though there are over 600 types of Eucalyptus trees in Australia, Koalas will only eat a select few of them and are even picky about where the trees are growing? This is because to most animals, Eucalyptus is poisonus. Actually, the Koala is only one of three mammals that can survive on a diet of eucalyptus leaves. The Koala has a specialized digestive system that helps to digest the toxins in Eucalyptus, but all that digesting is hard work and means Koalas sleep a lot! In fact, koalas can and do sleep for 18 to 22 hours. 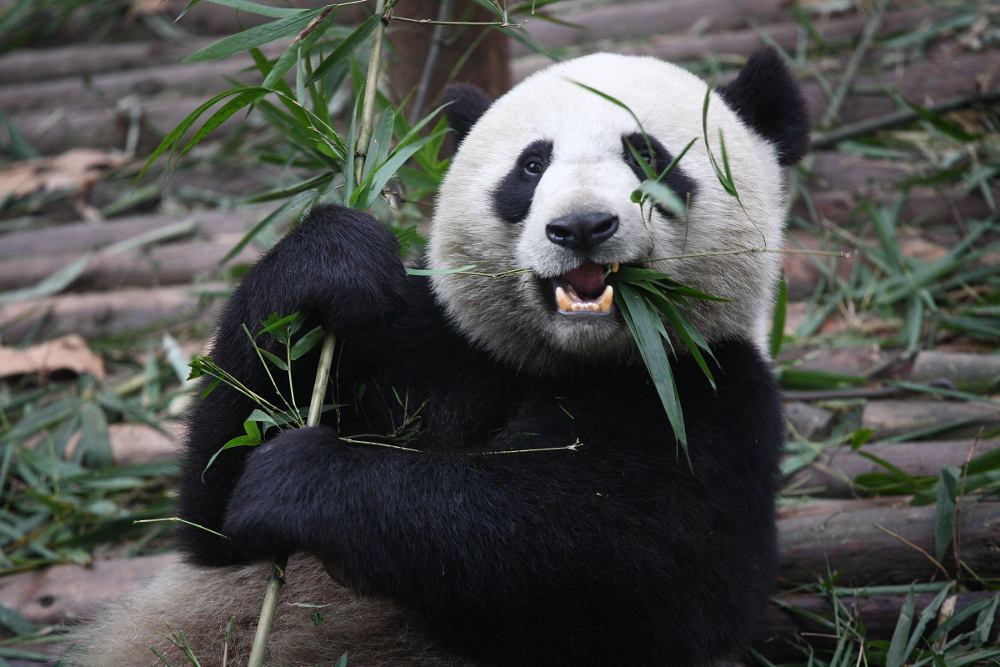 Not only is the Giant Panda (Ailuropoda melanoleuca) of southwestern China one of the world's rarest mammals (less than 2,000 survive in the wild) but the Giant Panda also makes our list of very picky eaters. Though Giant Pandas are technically omnivores and will occasionally eat fish or other small animals, 99% of their diet consists of strictly Bamboo shoots and leaves. Though Pandas can grow to weigh up to 300lbs, the reality is that a diet of bamboo is not very nutritious. To make up for that, Pandas eat A LOT! To stay healthy a Panda must eat up to 15% of their body weight in 12 hours so they also eat FAST! Their broad and flat teeth help them chomp through their bamboo feasts. 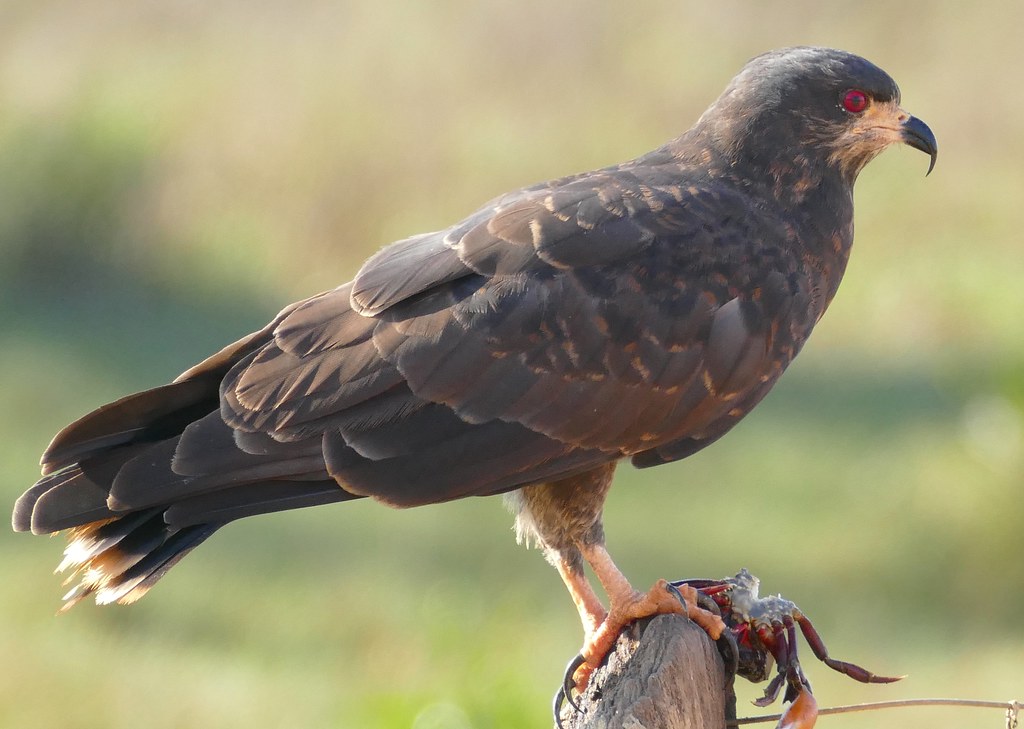 Kites are a kind of bird related to hawks and eagles. Here in Florida, we have a special native species called the Everglade Snail Kites (Rostrhamus sociabilis plumbeus). Though these carnivorous birds can eat turtles or fish, they subsist almost entirely on a diet of small apple snails that are also native to the freshwater swamps of the Florida Everglades. These picky eaters use their long-curved upper beaks to pull snails from their shells and munch on their favorite snacks. Like many of the unique animals on our list today, Everglade Snail Kites are endangered. Habitat loss means Kites not only lose the place where they live but also where their food lives. In addition, recently a larger  invasive (non-native) South American species of apple snail has begun to invade the feeding areas of the Kite. Though the Kite will also eat these new snails, the significantly larger snails are harder to catch and eat especially for younger, smaller birds. This may also be effecting the livelyhood of the Everglades Snail Kite. 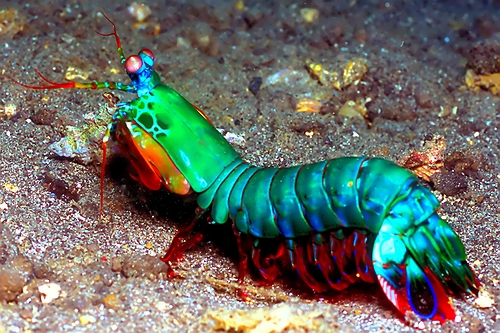 The Peacock Mantis Shrimp (Odontodactylus scyllarus) may be small (just 7 inches at the very largest) but don't mess with this carnivorous crustacean because it takes its cues from the boxing ring. The Peacock Mantis Shrimp is native to the waters of the Indian and Pacific Oceans and makes our list not for what it eats, but rather for how it catches its food! Mantis Shrimp are named for their large front claws which make them look somewhat like the ocean's version of a praying mantis insect. But these little invertebrates aren't praying with their limbs, they're punching! These shrimp eat mostly crab and other crustaceans and when they've found just the right meal, they spring out a front claw like a boxing glove and land a swift punch to the prey. The punch is 50 times faster than the blink of an eye and strong enough to break glass so chances are, if they land the punch, they're in for a meal!

Last but not least, our final animal is another one that we're calling out for its fantastic hunting rather than its diet. We're talking about the Banded Archer Fish (Toxotes jaculatrix) found in many areas of coastal Asia and Australia. Archer fish eat mostly insects which you might think would be difficult being that not too many insects just hang out in the water, but that's where the Archer fish's excellent hunting comes into play. These aquatic archery experts shoot streams of water out of their mouths and into the air to knock spiders and insects out of the air or nearby plants and into the water where the fish can feast. Archer Fish can shoot their watery arrows up to six feet away and they aim by moving or opening and closing their mouths in certain ways. These oceanic sharp shooters are just amazing!