Learn more about the Waldo Branch

A small library in Waldo was originally established by Reverend Fred Yerkes in the parsonage of the Episcopal Church. Years later, the Reverend passed the library over to Fern Ganstine. Then for some years before 1994, the only library services in Waldo came by bookmobile every two weeks. It was a big silver van sent out from the Headquarters Library, and it parked on Cole Street, near the Yerkes Center.

Alachua County Library District took over the small building that Yerkes had originally used on 14257 Cole Street in 1996, which became the Waldo Branch for 23 years. The branch operated with only 4 computers, and everything was housed in one room, including the children’s area,  the reading area, the staff area, the books, and two tables. Michael Kemp became the first librarian at the Waldo Branch, and Melanie Aultman became the library assistant. There were 7,000 holdings at the branch and programs were held at the school, the Waldo Community Center, and the Yerkes Center, because of the small size of the branch. 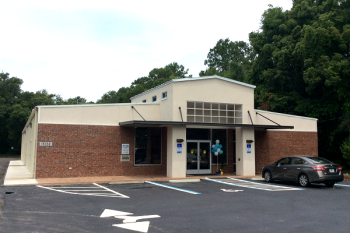 In 2014, the Library District spent $325,000 to buy the empty Dollar General on Highway 301 for storage, which is where the Waldo Branch eventually found its new location. The ACLD paid $814,000 to prepare the building for the new public library. The Cole Street location was closed for relocation on May 31, 2019 and the new location of the Waldo Branch opened on June 8, 2019 with 250 people attending the Grand Opening.

The current branch manager, Kerry Dowd, has served as manager since 2016. She attends Waldo City Council meetings and has become an integral part of the Waldo community. The branch serves the reading, movie, computer, and program needs for the Northeast part of Alachua County drawing patrons from Waldo and beyond.

Today, the Waldo Branch Library still has the storage area for the Library District, houses 13,500 items, and has a Children’s Area, a Teen Room, a Meeting Room, two Study Rooms, a Quiet Reading Room, a Seed Library and 17 computers. Unique to Waldo is the ArtSpace (a Makerspace for Art), a Where’s Waldo weekly game, Community Weatherization kits, and first dibs on Tim Dorsey’s author visits. Staff are also active in outreach in Waldo’s Head Start program and the community’s Truth and Reconciliation and other events. Currently, the Waldo Branch is fully staffed with four employees and one volunteer.