The Bookish Sort Book Club meets the 1st Thursday of each month at 4:30 p.m. in Hawthorne’s Meeting Room. Join us for lively discussions of fiction and nonfiction titles selected by participants in this vibrant, member-led group!

The Bookish Sort Book Club met Thursday, October 6, at 4:30 for a discussion of American Dirt. Nine of us enjoyed this month’s meaningful discussion. The advantage of a diverse group discussing a focus book is the range of interpretations of the same work by members of the group. This has never been truer than with this book: Ginger began with a question about the meaning of the title and who would have believed all the various perspectives on such a simple enquiry. Our discussion then turned to the characters: with most people feeling that Lydia and her son, Luca, were well developed but the other characters could have been more fully developed. The book began with a very graphic scene and followed with many dangerous incidents; some members of the group found these parts of the book hard to experience. Others found the entire book a page turner.

Critics of the book in the press mentioned a number of minor inconsistencies and errors in the plot and descriptions of life in Mexico; however, whatever the reaction, critics and our group agreed with one reviewer who said: “Some of the criticisms may certainly be valid, but they don’t diminish the importance or relevance of the story… If nothing else, hopefully productive conversations and awareness will be generated about the issues that the critics raise, as well as the timely issue of immigration.”

In November, we will make some selections for January and months afterwards. One book that has been suggested by Guylene (as well as on Goodreads) is Bewilderment by Richard Powers. Guylene says, “Warning: this is sad … It is a beautiful, hypnotic read with deep levels of covering everything such as ecology, astrophysics, what is means to be human, being a parent, being a child, and much more. This is a deeply immersive read with a sense of wonder and amazement; It is a mind and heart opening must-read." 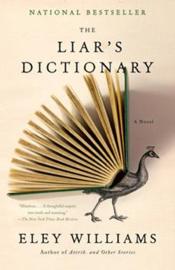 The Liar's Dictionary by Eley Williams

“An exhilarating and laugh-out-loud debut novel from a prize-winning new talent which chronicles the misadventures of a lovelorn Victorian lexicographer and the young woman put on his trail a century later to root out his misdeeds while confronting questions of her own sexuality and place in the world.

Mountweazel n. the phenomenon of false entries within dictionaries and works of reference. Often used as a safeguard against copyright infringement.

Peter Winceworth, Victorian lexicographer, is toiling away at the letter S for Swansby's multivolume Encyclopaedic Dictionary. His disaffection compels him to insert unauthorized fictitious entries into the dictionary in an attempt to assert some sense of individual purpose and artistic freedom.

In the present day, Mallory, a young intern employed by the publisher, is tasked with uncovering these mountweazels before the work is digitized. She also has to contend with threatening phone calls from an anonymous caller. Is the change in the definition of marriage really that upsetting? And does the caller really intend for the Swansby's staff to 'burn in hell'?

As these two narratives combine, both Winceworth and Mallory discover how they might negotiate the complexities of the often nonsensical, relentless, untrustworthy, hoax-strewn, and undefinable path we call life. An exhilarating debut novel from a formidably brilliant young writer, The Liar's Dictionary celebrates the rigidity, fragility, absurdity, and joy of language.”  (Goodreads)

A couple of group-read books have been suggested for our December Holiday Meeting. We’ll make a decision in October. This is not a book you need to read ahead of time; we will take turns reading in the meeting. We will briefly discuss the book at the end if time permits. In the past, we read the following:

Send Guylene (gresue@aclib.us) any news or announcements you would like to see added to this blog.

Want to see what we’ve been reading? Check out our group’s reading history list from when we started in September 2013: