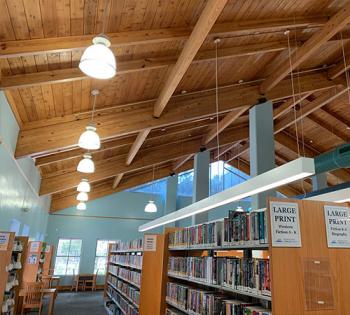 Learn more about the Millhopper Branch 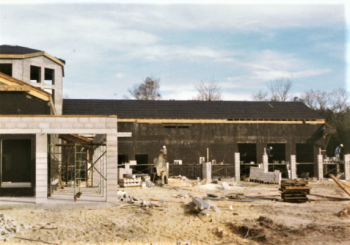 Milhopper Branch, located at 3145 NW 43 St, was the second library to be built in the City of Gainesville after the 1986 formation of the Alachua County Library District. Land for the Northwest Branch – the branch had not been officially named yet – was purchased in 1989. The Branch was built just after the Headquarters Library finished the large four-story building at its current location. The grand opening of the 15,000 square foot Milllhopper Branch was on Nov. 12, 1992. When it first opened the hours were Monday and Wednesday 12:30-9 p.m., Tuesday and Thursday 10 a.m.-6 p.m., and Saturday 10 a.m.-5 p.m. The branch has been refurbished and expanded several times over the years, to its current size of just over 23,000 square feet. Millhopper Branch is unique in that it is the only location with a Tot Lot, a playground only accessible from inside the children’s area of the library.

In December 2008, the Millhopper Branch closed for a year-long renovation and expansion. A portion of the materials, computers, and library staff moved to a new location during this time. The branch was temporarily relocated down the street, on the second floor of the Bank of America building at 2627 NW 43 St. Due to the small size of this location, programming was not possible and patron seating was very limited. Patrons could use internet computers, use the printer and copier, get new library cards, check-in and out materials, pick up holds, and receive reference help. 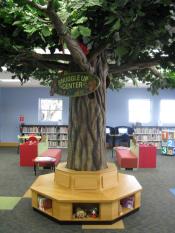 On Feb. 26, 2010, the Millhopper Branch had a grand re-opening. The expanded building was 23,500 square feet and included two kitchens – one for staff and one for the meeting rooms, a second meeting room, more staff offices, a quiet reading room, and a much larger children’s area – which included restrooms and a playground. The circulation and reference desk were combined into one and a service desk was added to the children’s area. Much more patron seating and tables were added. Themeworks, Inc. located in High Springs, created a beautiful tree that took the place of the original tree that library staff had made from chicken wire, papier-mâché, and fabric. The new tree is the highlight of the children’s section. Since then the teen area was enclosed to have programs without disturbing other patrons. In 2019, three study rooms were added and have been in high demand. In 2020, limited services were moved into the meeting room and the branch got a refresh with new carpet and paint. In 2021, work began on a new roof. 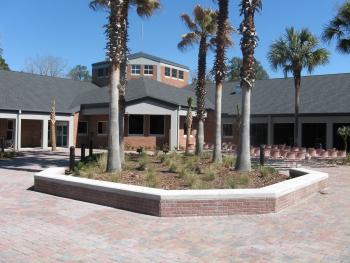 The Millhopper Branch is a very popular location. For the majority of the last decade, the branch has led the Library District in the number of physical item checkouts and the number of attendees at children’s programs. Weekly story times would often top 100 participants and Music and Movement programs had to start doing a 10:30 a.m. and 11:30 a.m. program with free tickets to meet demand. Public Services Administrator Emily Young is very familiar with the popularity and clientele of the branch. Young said, “I worked at the Millhopper Branch for just over 20 years in a variety of capacities. The Millhopper location serves a wonderful blend of customers from all over the county who stop by while running errands in the area as well as the regulars who live around the corner. I enjoy the vibrancy of the atmosphere and the diversity of the customers when I’m at Millhopper.”

The branch has been involved in many community partnerships over the years. Santa Fe College, the University of Florida, the City of Gainesville, and Florida State Parks have been some of our most habitual collaborators. Pre-COVID-19, Gainesville Fine Arts Association and the Quilters of Alachua County Day Guild had artist exhibits. The Writers’ Alliance of Gainesville and the Alachua Audubon Society would have monthly meetings that included authors, editors, scientists, and photographers who would give public presentations. Current partners also include the Alachua County Supervisor of Elections for early voting and the AARP Foundation for their tax-aide training and assistance. Over the years, numerous local businesses, clubs, organizations, and individuals have volunteered time and talents to bring great programs and services to the citizens of Alachua County. 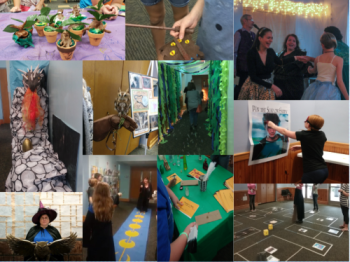 The branch’s most unique program is the Millhopper School of Witchcraft and Wizardry. In 2017, teen librarian Karen Malloy, created this extensive, expanding, educational, and entertaining program that has brought in thousands of attendees. The program follows along with the Harry Potter books and is currently in Year 5. It has included the Sorting Ceremony, Diagon Alley, OWLs, a Horcrux Hunt, the Yule Ball, and NEWTs. The school has partnered with many local groups to teach classes in martial arts, anti-bullying, and fencing (Defense Against the Dark Arts); dog training and wildlife education (Care of Magical Creatures); science experiments and DIY bath products (Potions); and gardening (Herbology). Teen-focused programs like, Dumbledore’s Army, Mrs. Weasley’s Knitting Circle, and MSWW SewingSpace programs made Harry Potter-themed crafts. MSWW students made chocolate frogs, golden snitch marshmallows, and butterbeer at FoodieSpace programs. At the end of each year, the house points are tallied and the House Cup winners are celebrated. Gryffindor has won the last two years. Who will win this year?

From the beginning, the staff of the Millhopper Branch has worked hard to give the public what they need to participate, connect, and discover. The staff has dedicated themselves to recommending great books, assisting in research, teaching computer skills, providing a quiet place to study, and bringing fantastic programs to educate and entertain. Chiquita Powell, Senior Branch Manager of the Millhopper Branch, is relatively new to the Library District. She said, “Being the Branch Manager for a little over a year, I quickly noticed that even though the Millhopper Branch is the busiest location and a large library, the staff have done an excellent job with connecting with our patrons. Staff remember patrons’ names and their stories, and this contributes to a sense of community when you walk through our doors.” We welcome you to come to the Millhopper Branch and discover what makes it such a special place.